This article takes a data-driven approach to tell the story behind addressing the global challenge of sustainably feeding the growing world population. The presentation is geared toward both educating general audiences about the food challenges connected with population growth, and persuading policy makers to adopt certain strategies for mediating the global supply and demand for food.

The data presentation uses both qualitative and quantitative data – using photos to document the diversity of food producers around the world and the impact of our agricultural footprint, and visualizations to convey key statistics that are central to the story – namely, mapping the global agricultural footprint and visualizing the projected need based on population growth. 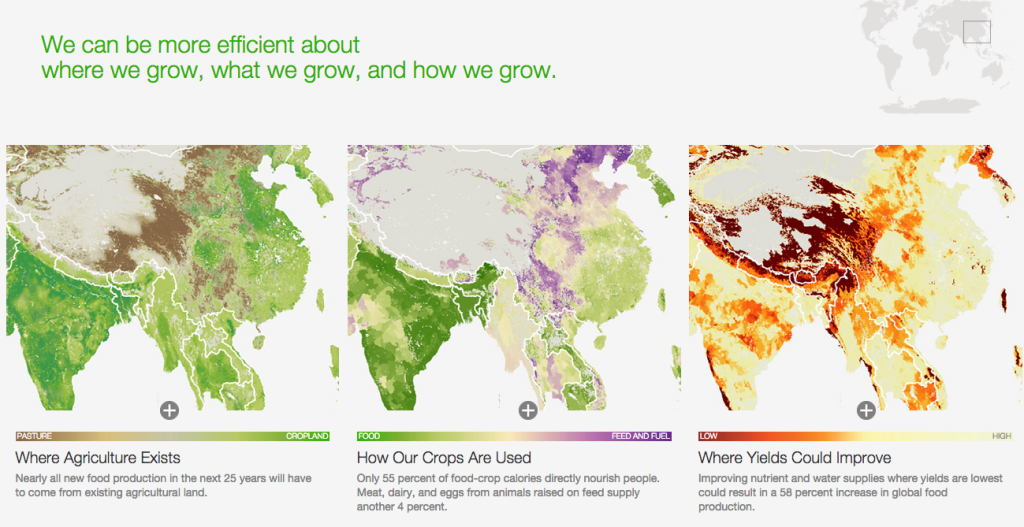 In general, this data presentation uses a blend of techniques to effectively meet the goals of both educating a general audience, and conveying a set of high level strategies for policy makers to consider in the context of addressing this global food challenge. The use of interactive visualizations encourages the audience to explore the data, while the curated images and static charts depict very deliberate and specific data points that help to support the narrative of the article. The types of visuals are intuitive to interpret and do not require a high level of audience data literacy, and they can be taken both within the context of the article, or as standalone pieces. The structure and techniques employed within this data presentation are effective in empowering the audience to engage with the data presented while also reinforcing the key strategies proposed within the article.

Bono’s TEDTalk aims to inspire its audience to address extreme global poverty and explain the history of anti-poverty campaigning. He motivates his audience, who are primarily people interested in addressing poverty but skeptical of the impact that is being made, largely be presenting data. His TEDTalk includes graphs that highlight the impact that previous interventions have had on poverty, AIDS, malaria, and child mortality.

One way in which he makes his presentation of data particularly effective is that he manipulates it to show statistics over short- and long time-scales. For example, when discussing child mortality rates, Bono presents the statistics on number of lives saved on a daily basis, making the impact seem much larger and much more tangible. However, when discussing the progress that can be made in reducing extreme global poverty, he shows data over large time-scales and includes projections, making it seem realistic that extreme global poverty could be ended by 2030.

The goal of showing this data seems to be to revitalize efforts to eliminate extreme global poverty. In particular, Bono aims to show that elimination of extreme global poverty is a realistic possibility within our lifetimes. In general, the way he presented his data seemed very effective. The data presentation made it clear that significant progress had already been made, and that based on what has already been done, elimination of extreme global poverty, which at first seems unrealistic, may be possible. However, the presentation could also be more effective because the examples he gives in the medical field show the amount of people whose quality of life has improved, but does not give a sense of to what extent the problem as a whole has been addressed.

Over the past month, I’ve done an unholy amount of work with demographic data from the U.S. Census API.  Specifically, I was looking at what characteristics of a community affect broadband access in that community.  One of the features I looked at was economic inequality, which can be measured by the Gini coefficient.  Briefly, the Gini coefficient measures how equally incomes are distributed across a population.  The visual presentation is pretty intuitive, as you can see here:

News organizations seem to love using the Gini Index to talk about the effects of taxation and relative economic inequality worldwide, just to name a few. It’s a really universal, powerful way to talk about inequality.  Here’s an example from the Washington Post, presumably for the internationally curious.

This is pretty interesting; since the countries and continents aren’t labeled, the authors of the map likely assumed basic geographic and historic knowledge; if you don’t know that the big dark red landmass in Asia is China and China is ostensibly a Communist country, for example, you won’t have the “huh” moment where you reflect on the way China’s brand of Communism has evolved to its present-day capitalist form.  Similarly, someone without a grasp of the history of colonialism in Africa, particularly the social woes of Southern Africa, might find the incredible economic inequality there anomalous. This map would succeed best in telling its story with expert commentary, some level of mathematical competence (to know what the Gini index is), and historical context; for that reason it’s probably speaking to a well-educated audience with the patience to pore over the map for at least a few minutes.  The problem, though, is that the map by itself places the onus on the audience to tell the story.  Sure, the Gini index is a powerful measure of inequality, but inequality is the result of many forces, both cultural and historical.  Without that context, and with so many stories, anonymous here, waiting to be told, the data isn’t as compelling as it can be, and that’s really a shame.

Now here’s our old friend the bar graph.  One of the things taxation can do is even out the distribution of wealth a little bit.  Scandinavian countries and, to a lesser extent, Western Europe, appear to employ taxation as an equalizing method.  Again, without being conversant with the paradigm a country uses to govern itself, this doesn’t mean much.  Nor do we know what the effects of this policy–which countries have a better quality of life? how many people live in poverty?  This is just one picture in a story about inequality that is rich in detail and nuance, all written in the same language thanks to the Gini coefficient.

Wealth Inequality in America is a popular YouTube video by author “politizane” with a simple message:

Not only is the problem of wealth inequality in America worse than ideal, it’s worse than you could imagine

I believe what makes the video so captivating (over 16 million views) is the way politizane turns his data into a story about the victimization of his audience (lower and middle class Americans).

Politizane begins by displaying three stacked bars with overlaid animation to show that the ideal, expected, and actual wealth distributions are vastly different. In doing so, he makes it clear that wealth inequality is far worse than imagined. But he does not stop there. Instead, he animates a 100 small stick figures and places stacks of money on top of them. As he explains how the actual wealth distribution is worse than expected distribution, dollar bills fly from the poor stick figures to the rich stick figures. Although he’s ultimately just presenting histograms, politizane builds a story – we begin in a world of wealth equality until the rich take most of money away from the poor and middle class.

In this video, we see the difference between presenting charts and data storytelling. Stacked bars give us distributions and the main point, but politizane’s stick figures give us a protagonist (poor and middle class), an antagonist (the rich), and a plot (the rich have taken money from the poor) while utilizing a simple histogram as the basis. In about 5 minutes, politizane has shown his audience the data, made them feel victimized, and given them an enemy, thanks to his storytelling. 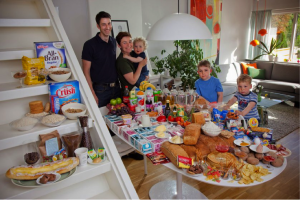 Husband-and-wife team Peter Menzel and Faith D’Aluisio traveled around the globe to 30 homes in 24 countries, investigating what families eat over the course of a week and how much it costs. The result was Hungry Planet: What the World Eats, a book published in 2006. With the turn of each page we see each family photographed where they dine, flanked by their week’s worth of food products.

This project came to mind when we were discussing food security during Tuesday’s class. The photos probe questions both about health and economic access to food—a perfect fit for the theme we’ll be exploring this semester.

The photographs are geared toward a generalist audience: the Hungry Planet book has had mass and viral appeal, and has been highlighted in media such as TIME and NPR. (In fact, I’m pretty certain I first heard about these photographs when an acquaintance posted a link on Facebook.) The project aims to get people thinking about what they eat, where they get their food, and how much money they spend. It illuminates the disparity of food access and health choices around the world—from the Norwegian family of five that spend almost $400 on food, much of it processed and packaged, to the family of 15 in Mali that prefers to cook traditional rice dishes and spends $26 a week.

I choose to write about these photos because of the questions they bring up about data visualization. What does it mean to present data? Here, we see the photographer present data about food consumption in the most literal form, by documenting the actual families and food. For me, eschewing the language of graphs and charts in favor of this approach is effective, leveraging the visual power of raw foodstuffs and colorful packaging to pack a visual punch. 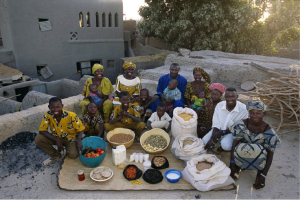