Conservative media and lawmakers often perpetuate harmful stereotypes about SNAP recipients, often insinuating they are irresponsible and “undeserving” of the benefits they receive. For example, Donney Furgerson, Republican Senior Stockman’s Senior Communications and Policy Advisor criticized SNAP as a “liberal stunt” of the economic growth while supporting the cut-down of the SNAP benefits. Our goal is to take a closer look at one such stereotype, that SNAP recipients prioritize “junk food” over more nutritious options and show the story is much more nuanced and complicated.

In fact, data from the Food Insecurity Among Somerville SNAP Contingent survey show that people with SNAP want to eat more fruits and vegetables, but that the main barrier is money and access.

Our chart is intended for an audience who is not food insecure – we aim to build understanding and empathy by telling this story. Our visual is a series of pie charts in the shape of various foods. The sentences that accompany the charts describe the data and the reality of SNAP recipients. For example, nearly 50% of the participants in the Somerville survey on SNAP recipients said they rarely or never bought junk food; at the same time, 39.3% of participants said nutrition would be a higher priority “if money were not such a pressing issue.” Finally, there is clear demand for fruits and vegetables – a separate survey, conducted by the Somerville Institute for Community Health showed that 59% of respondents wanted to see more farmer’s markets in their neighborhood, and 30% a “green grocer/produce seller.”

Our first take-on was Google Chart: 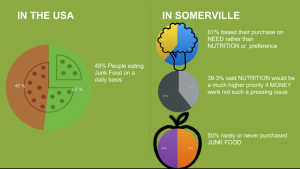 However, we felt constrained by the options in Google Chart.     So, we went back to the traditional pens and crayons. 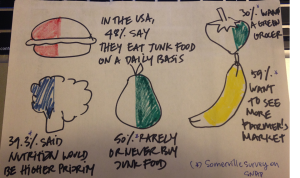 The two different methods helped us organize our presentation ideas.  We decided to create the final version of our data charts by using Picktochart. We also added new data from a national survey on how often Americans buy “junk food” in order to provide some context to compare our Somerville data. 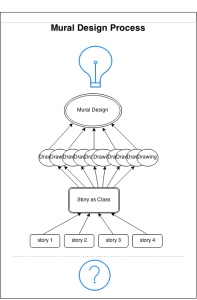 Some reflections on this design process helped me to compare it to one of my previous projects.   During the cold and snowy winter of 2014, I  and three other MIT students worked to design an interactive dashboard that analyzes Twitter and Facebook activities of non-profit organizations. Briefly speaking, below is the procedure we followed:

This process is similar to the mural design process in that it had modularity and involved group efforts within each module. First, the modularity arose from the step-by-step procedures and several milestones we established as checkpoints: the goal of the project was defined first, and the process was broken down into three smaller steps/milestones.  The difference arises in the way tasks were distributed between the members.  Instead of a group of individuals working together to finish a small module, each person was in charge of a designated task at each step. Each task was discussed after the corresponding milestone was reached, and each code was ready to be reused by other members if needed.  This combination of distribution and code-sharing helped to maintain communication between members while enforcing the modularity in the process.  It was however harder to understand other members’ tasks and thought-process, which required that everyone became an expert in his/her given task.  In comparison, the mural design process did not rely heavily on any particular individual because each module was done in a group.  I definitely felt that the mural process better captured the ideas common and prevalent in our class; it somehow felt more democratic.

The two design processes discussed above share similarities in its step-by-step approach and distributed workload.  However, they are different in the way each step is finished and each task was incorporated into the final design; the design mural process had one more filtering layer in which the entire class decided what to include from each group’s work.  Both of the processes have pros and cons, and it is important to know which path to take according to the goal and circumstances of the work.

As I started to gather some tips for my trip to France, blogs and guidebooks bombarded me with the pictures of elegant French dishes and long lists of the “Must-Try” restaurants.  Similarly, when I prepared for my trip to China, every resource talked about food–the diverse style of cooking in China, what to try on the Markets, what spices are used, what I must try and what I must not, etc.  It seems like traveling cannot be talked about without talking about food, and I believe that goes pretty much the same with life..!  As an enthusiastic eater and “eye-eater” on food blogs, I recently found this poster that alerts travelers about their food safety. 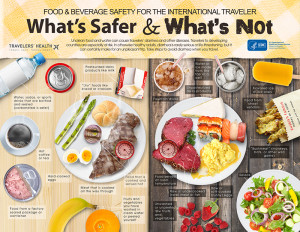 This poster categorizes common foods any traveler encounters during their trips into ‘safe’ and ‘not safe’.  It displays actual pictures of the food and successfully grabs its audience’s attention (and appetite).  It must have been hard to skip over this page, if it were on magazines such as ‘Budget Travel’ and ‘Travel & Leisure’.  The poster informs the international travelers that fresh food such as salad, raw fish/sushi and fruits are more dangerous than dry food such as canned tuna and cooked meals such as boiled eggs and grilled vegetables.  It also suggests that while bottled water is reliably safe, tapped water should be avoided or drank with caution, depending on the countries they are travelling.

This poster successful grabs the readers attention by using actual pictures of the food, instead of simply listing the safe and unsafe items.  It also does a good job of pairing the counterparts (for example, bottled water vs. tapped water, cooked steak vs raw meat, boiled egg vs. not-fully cooked scrambled eggs).